The morning started bright and early.  We made our way from CL to Chicago fairly quickly.  Well, at least until we got closer to Navy Pier, then it was traffic central.  Race time was nearing and I knew I’d have to hit up the bathroom first, so I hopped out while my parents went on the hunt for parking.

(Turns out they delayed the race because of parking / a vendor no-show.)

It was a beautiful day for a race.

It was chilly and I was definitely getting anxious waiting.  But finally the 10 milers were lined up and off, so it was time for the 10k runners to line up.  Knowing I didn’t want to go out too fast, I lined up with the 10 minute runners.

We were off and dang were there a lot of people!  It felt like first mile or two were spent weaving and dodging people.  There were several occasions where I was running in the grass to get around other runners and feel like I had enough space to run.

The race went fairly quickly but mile 5 to 6 definitely wasn’t easy.  I’m not sure if it was my pace being pretty quick and finally catch up with me or what but I was getting tired, thirsty (and I needed to pee!).

Suddenly in the last 1/4 mile my right arm started tingling like crazy and I had no idea why.  I shook it out and it started to feel better, only to notice later I popped a vessel in my arm.  Weird.

Anyway, I was pushing hard; the Finish Line was in sight; there were crowds everywhere cheering; and suddenly I got a second wind and was pushing really hard.  I was going fast! 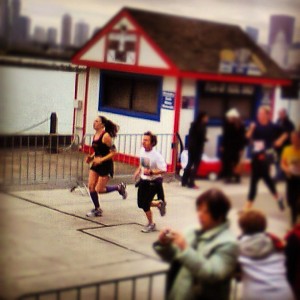 My dad captured this  on his phone and while it may not show my speed, it felt like I had no legs and was instead just moving through space.  Don’t try to figure that out, it’s how I felt.  Call it runner’s high?

I was moving so fast, I almost had a hard time stopping before running into the guys handing out the medals.  In fact, I like to think I was running so fast, they missed me coming through and that’s how I initially almost didn’t get my medal. 😉  But I turned around, stood in front of a guy until he gave it to me, grabbed a banana, Powerade, Zico coconut water and made my way to the ‘rents. 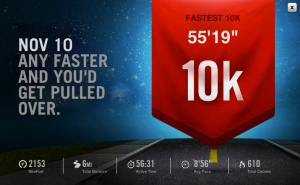 I drank the Zico and saved the rest for later.  We did a quick walk through the Expo (it wasn’t very big or exciting) and then made our way home. 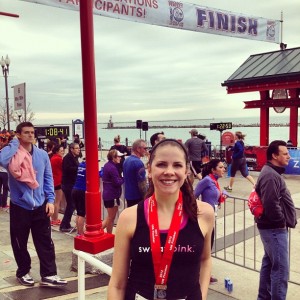 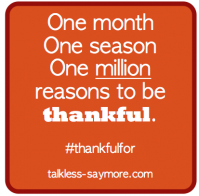 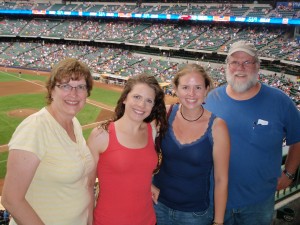 Have you accomplished any new feats this weekend?

What are you thankfulfor today?