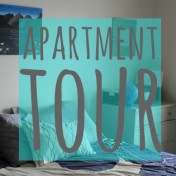 I’m pretty sure I promised a tour my apartment about 4 months ago when I first moved to Grand Rapids. I’ve been pretty settled for awhile but kept telling myself “next week”…repeat that countless times and it’s now been a few months and I’m quite overdue. I decided that not only did I need to finally share a peek into… Read more »

Alright, alright, I’ve been leading you all on long enough. But it’s quite funny, now that it’s time to share the news, I don’t really know what to say and it’s feeling a bit anti-climactic, even though it is quite exciting. If you’ve been following along for awhile, then you probably know I have been unemployed and on the job… Read more »