Quite honestly, I’m still processing what happened Friday afternoon; trying to find my words to explain how I felt and the thoughts that ran through my head. The problem being that I think I just had every thought so it’s hard to pick just one. Because of that, it’s hard to focus this post or pick the title that best describes it. 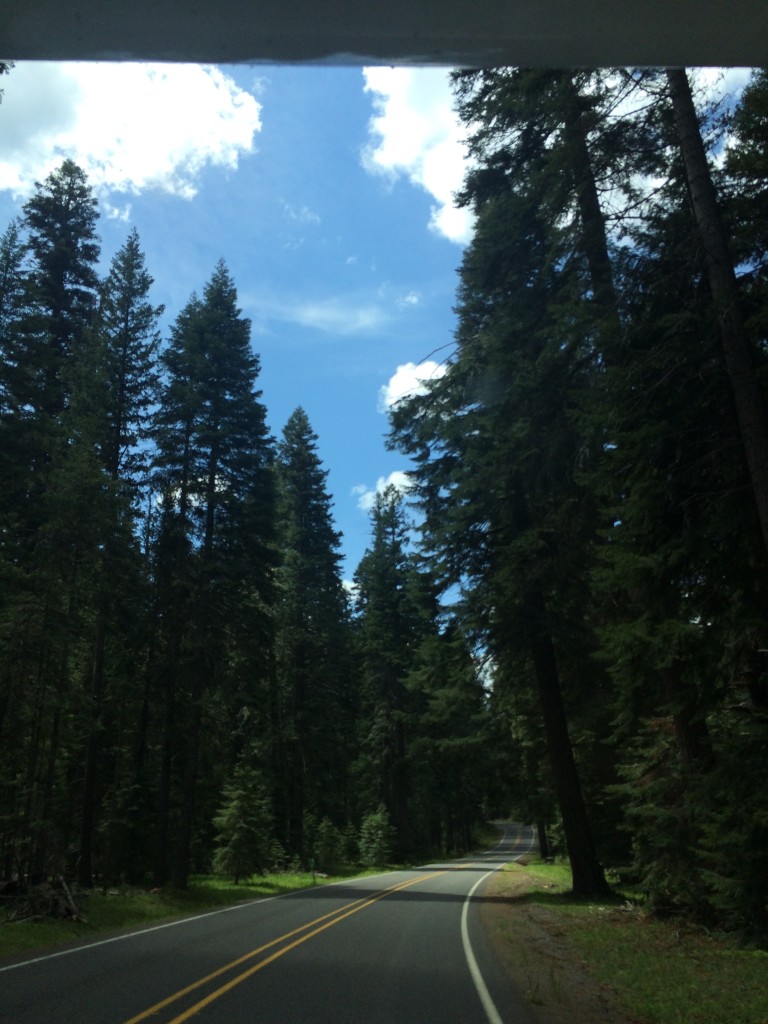 You see, this year is full of adventure and stories – some that we’ve told, others that we’re a bit more careful to share just yet, but Friday’s story is one that I couldn’t help but share, mostly for selfish reasons as I needed my friends and family across the country to be there for me and help me through it.

Thursday evening after our event, Samantha and I were both feeling pretty awake and decided to get in a couple hours of the 8 hour drive to Ashland, OR out of the way. I started driving and after about 2 ½-3 hours, I was pretty tired and either ready for bed or for Sam to take over. She was tired as well so we found a spot to pull over for the night and get some rest.

Friday morning I woke up early and started driving. I got in another 3 hours or so before letting Sam take over. We found a campground to stay at for the night (we don’t often do this but we needed to empty tanks and take showers pretty bad) so I updated the address in the GPS. I had a few options for the route but this particular one was calling to me, so I selected that one.

We were up in the mountains pretty good, it was beautiful but it’s not always the most fun to drive especially in an RV. We were about 20 minutes from our destination when our brakes squealed a bit more and there was definitely a smell. We knew they weren’t happy but we would take it carefully and soon they’d get a rest for the night.

The smell was bad and I was sure it couldn’t just be us (we just got new brakes last month!) so I look up and see a semi truck in front of us. His brakes are definitely smoking a bit and there’s dust stirred up. The smell is just awful.

Sam and I are both quietly watching and not saying anything as we’re watching the semi speed around each corner and get further and further away. I am remembering every “runaway truck ramp” sign we’ve seen in the past 7 months and waiting to see one on this mountain, he’s definitely losing (if not entirely lost) control of his truck. 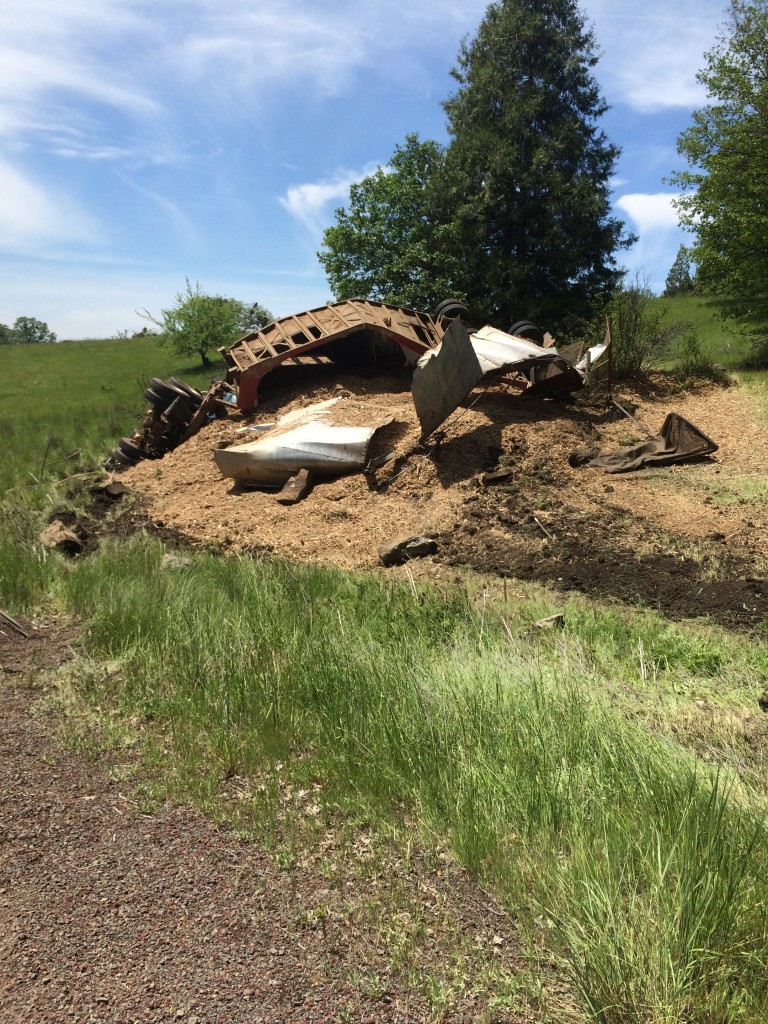 We turn one final curve and in this grassy area there is a giant pile of woodchips that’s smoking a bit. I don’t even realize it and just go “Oh my God!” and moments later Sam says the same and goes “is that him?” and I respond “it can’t be! Where’s the cab?” Sam pulls over and meanwhile I’m picking up my phone to call 911. I’ve lost service but she still has some so I toss her my phone with the map so she can call, throw on my flip flops and run outside.

Another car came up the mountain from the opposite direction and saw the puff of smoke of him crashing and pulled over as well. The cab was smashed and the man asks me “is the driver out?” and I said “no, I don’t think so.” A motorcycle pulls over to help us and a lady who lives down the street and heard the crash came running over after calling 911 herself. There were enough of us calling that they knew exactly where we were and assured us they were on their way.

Some bikers came and Sam joined them in getting traffic to slow down around the curve since there were so many of us now parked along the road trying to help. I stood there waiting for help to arrive, to let them know the situation, what we knew and ready to run back to the RV for anything that was needed (water, towels if there was blood).

If there’s a way that your heart could race a million miles and be stopped all at once, I’m pretty sure that was me. I found myself questioning myself – how could I help more? Was I just in the way?

The guys found the driver who was pinned down. The lady who came running over was a nurse, she confirmed he was breathing ok. The other two gentlemen kept talking to the driver, reminding him help was coming and to remain calm. When the first officer showed up, I let him know what we knew and he headed over to the driver. Shortly after fire trucks, paramedics and officers showed up. They rushed over to the driver; this was the moment when my emotions started to catch up with me.

Even more so, I felt helpless.

We were on the scene for over 2 hours. They had to cut him out of the remains of the cab, they brought in a helicopter to take him away and meanwhile, nobody said a thing. They asked my name and what I knew and then let me know I could go back to the RV and they’d send Sam back down as soon as another officer arrived to help with traffic. It was a busy day for them and this ended up not happening.

As I stood outside the RV, my emotions came in waves. I had no service and nothing to distract me. It was just me, my thoughts and all of the wonder about this poor man.

After they took him away in the helicopter one of the paramedics came over to me and asked if I was ok. I told her what I saw, a bit about the 50 States story and my concern. She told me the man had fractures from the waist down and a head injury of some sort. She wasn’t sure if they’d tell me anything so she told me what she could. She made it sound like he could be ok but as I would later learn one of the officers told Sam that he was extremely beat up but was alive when they left with him.

We drove to the campground nearly in silence. We both knew we were dealing and just trying to breathe. After a little bit, we talked about what happened, how we were feeling. I learned that when our brakes squealed, Sam was slowing down more because the truck cut her off. I was looking down at my phone at the moment trying to entertain myself.

So many more thoughts and questions arose in my head. I can’t even list them all out because the thought brings me to tears to even start to wrap my mind around all of it.

Everything happens for a reason and we are where we are supposed to be in each moment for a reason. Sometimes it doesn’t make sense but we eventually learn why.

I’ve been thinking of this man all weekend long. I never met him, I never saw him and I may never know how he is or if he made it through. Unfortunately, this is a fact that I’m going to have to deal with. The question if I did enough will pop up in my head over and over, but I have to trust that what I did was enough.

4 thoughts on “A Moment That Changed Everything”