I can’t believe it’s been over a week since I woke up at the butt-crack of dawn on a Sunday morning in the pursuit of running 13.1 miles through the city of DesMoines, Iowa.  And while at this point, you all know I did successfully complete the mission, it’s time I share the story. 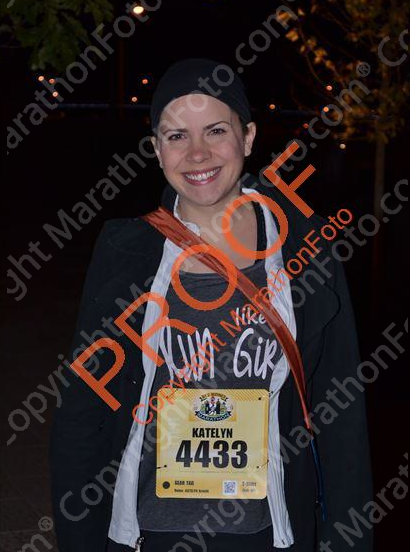 After breakfast, getting dressed and grabbing all my gear, I met my parents and aunt Bev in the lobby of our hotel to make our way to downtown Des Moines towards the starting line.  I was getting there really early, I knew it but I didn’t want to risk parking issues and really, better safe then sorry.  We stood outside for a little while and a photographer asked to get my before-race photo.  I obliged which led to a family before race photo shoot.  I was cold but I allowed the family to get their photos knowing I’d appreciate them later. 😉 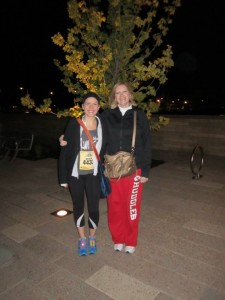 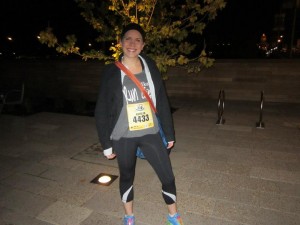 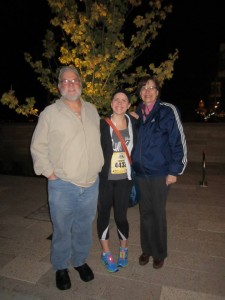 Unfortunately, there was nearly a bathroom issue pre-race.  As I was standing in a VERY long line for the bathroom at the YMCA, we found out there was only 1 working stall so I immediately hopped out of line, grabbed the family and made a b-line for the porta potties.  I started worrying I wasted too much time in the other line and wouldn’t have time to hit the bathroom first but thankfully, I made it with about 5 minutes to spare.  (And meanwhile while standing in line, I made my mom and aunt hold my stuff as I geared up so I could run for the starting line if needed). 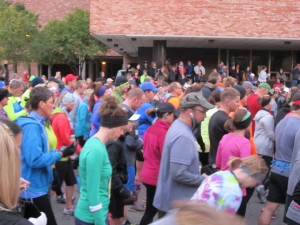 I was excited when I found Alex in the minutes before the race and we were able to line up together.  While I was running the half marathon, Alex was set to run the full. Within minutes, the National Anthem was sung and the race was started.  Since Alex and I had positioned ourselves between the 10:00 and 10:30 per mile group, it took several minutes for us to cross the starting line but once we did we were off! Alex and I locked into a really good pace together, of course letting one another know that at any point the other person could pull ahead if they felt necessary but we were both really happy with our pace and that wasn’t necessarily. 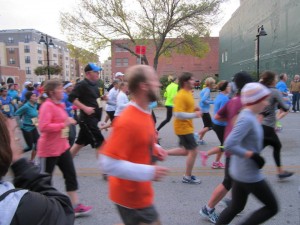 The half and full marathoners ran together for the first 2 1/2 miles or so and when we came upon that point, Alex veered to the right, I veered to the left and we wished each other the best for the remainders of our individual races.  I knew at this point that I could go faster but I also didn’t want to push it to hard and tried to keep the pace Alex and I had set from the start, it was still early and I didn’t want to max out.

It was chilly but with my homemade arm sleeves and gloves, I never felt like I was too cold. In fact around 3 or 4 miles in, I took off my gloves.  They were collecting any throw-away clothes/gloves/scarves/etc along the course for donation so after a few miles of not seeing my family along the course, I threw down my gloves. 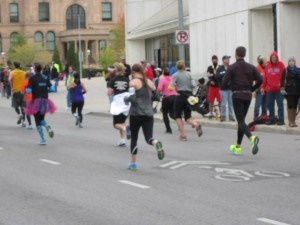 How many people would believe me if I said the race flew by?! But I’m not kidding. I had moments when of course things were slower, quieter and I hoped that when I turned the corner someone would tell me there was only a mile to go or I would see my family with big smiles on their faces and giant cheers. But overall, the race DID fly by.  I felt like after Alex and I split ways, next thing I knew I was running through the half-way point; then I blinked my eyes and there were only 2 miles left, I reminded myself I can run two miles; and before I knew it, I was running around the final corner to face the finish line. 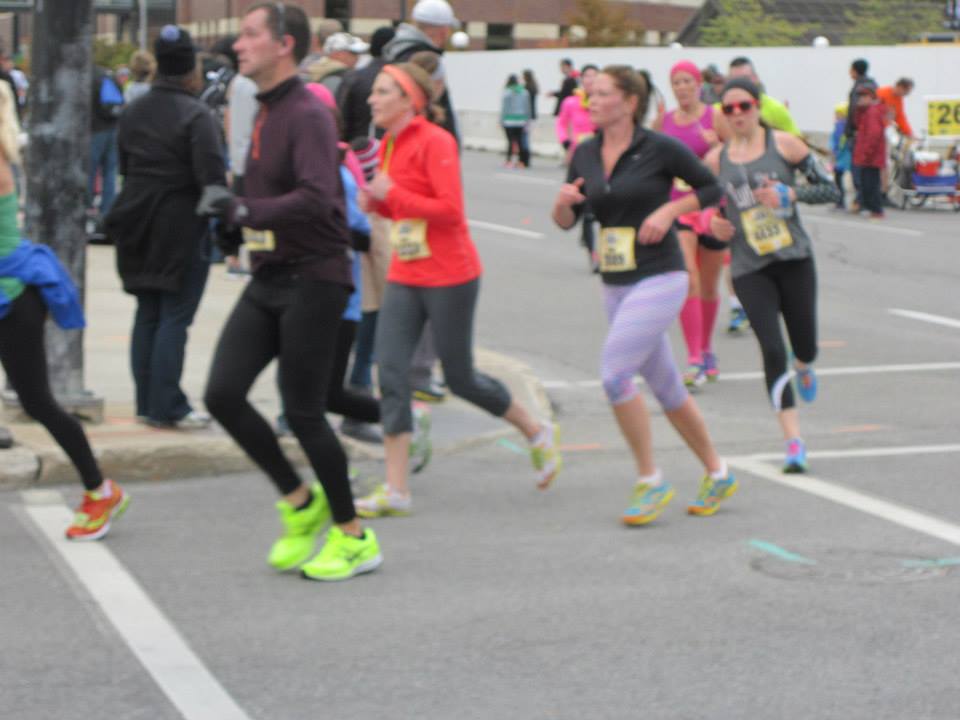 I tried to put on my fast legs as I went around the corner but as I realized the finish line was still further than I could sprint, I slowed down just a bit.  At one point, I was neck and neck with some guy.  We were running at the same pace and neither of us wanted to let the other get ahead (at least this is what I told myself and it was how it felt), but I dug deep and in the final moments, used every last bit of energy and power I had, pulled ahead and crossed the finish line. 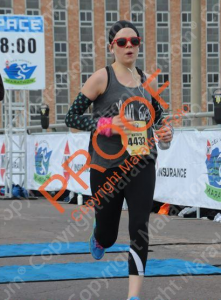 I got my finishers medal, some water, gatorade, and snacks.  I got attacked by the race photographers, found my family, took more pictures and made our way back to the hotel for a shower. I could tell you about how it took us an hour to get back to the hotel because we were driving in circles trying to find the way back that wasn’t blocked by runners, but it’s not really that exciting.

The Des Moines course was beautiful, the race was fun and I was so happy to have my family there, including my aunt who drove up from Missouri. I wish it had worked out for Amanda and Calee to be around too but I have no regrets running this race.  In fact, I’d do it again next year. (Though I do hope next year they have enough shirts so I don’t have to wait for mine to come in the mail…) 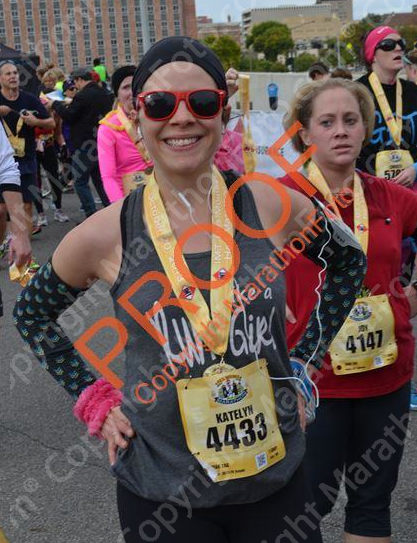 Can we just enjoy the look of the lady behind me who is clearly NOT amused by my stylish ways! 😉

Side note to anyone curious about my fueling strategy: english muffin with banana + pb and coffee at the hotel 1.5-2 hours before race start, 20-30 EnergyBits just prior to race start, 1 date every 3-4 miles or as I felt was necessary (pretty sure I only ate 3 the whole time though), FitMixer Clean Energy in my handheld water bottle and water from 1 or 2 of the water stops.  (There were PLENTY of water stops along the course…if you stopped at each one, it would probably have been too much, at least for me, but it was nice to know water was never far if I felt like I needed some). 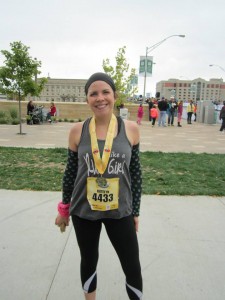 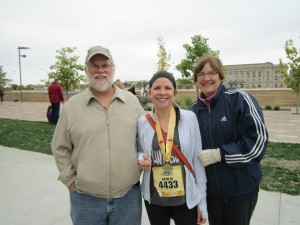 What was the last race you run? How did it go? 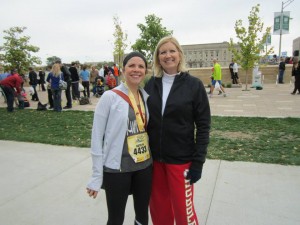 {Disclaimer: Photos were taken either by my lovely Aunt Bev or MarathonFoto and are not my own.}