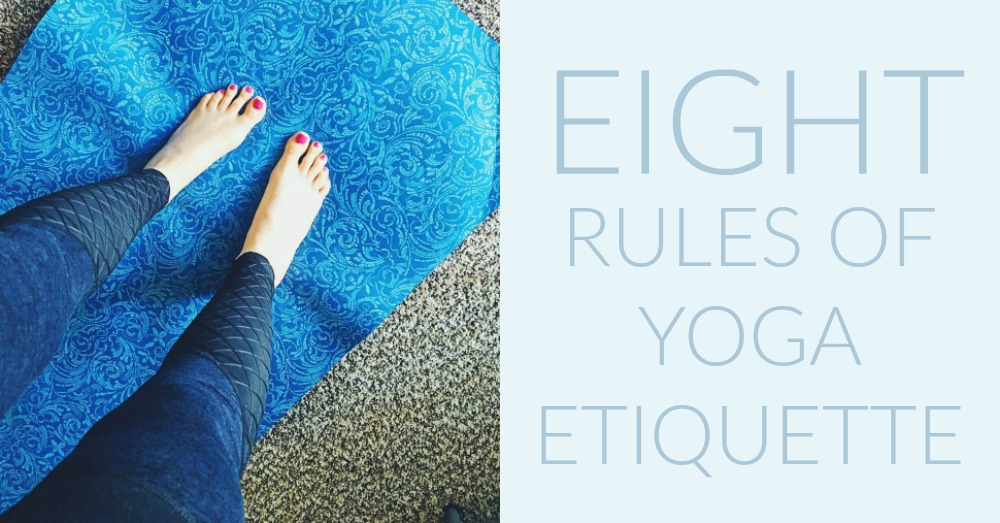 About a year ago I shared a post on yoga etiquette and I have a few things to add so let’s revisit this conversation. I’ve been practicing yoga off and on for about 9 years at this point and have been to a handful of studios, as well as practiced at home. I feel that so many of these points fall into the idea of general etiquette, yet are often overlooked by people. It’s also important to point out that studios can definitely differ and what may be a total no-no one place may be okay at another, so it’s important to get to know your studio. So let’s hop to it.

This means before, during, and after class. I have been to several studios where you are expected to not talk as soon as you step into the yoga room, but then I have been to others which are very lively. My current studio falls into a middle ground, but in general, I prefer when the space is quiet. It doesn’t usually bother me if there’s quiet chatter, but I enjoy a few minutes of peaceful meditation before practice so when someone comes barging into the room talking about XYZ, I really don’t enjoy it.

My current studio has a rule where they don’t let anyone in after 5 minutes, which I appreciate but as someone who has strong opinions on being on time regardless of where I’m going, I want to say just be on time. I will admit that I did sneak in 1 minute late to a class during the winter when snow slowed me down a bit more than expected and I pulled into the parking lot at 6am, but man, I was embarrassed and felt terrible.

3. Don’t slap down your mat

This may not necessarily be a rule of etiquette but it is one of my biggest pet peeves! Whether you’re early, on time, or late for class, you do not need to slap your mat down! You can quietly roll your yoga mat out without disturbing or scaring your neighbor, or the person on the other side of the room for that matter!

I hate that this has to be said, but leave your phone in your coat, purse or car. Unless you’re the yoga instructor who is using it for music and/or time, there’s really no need for it. Sure, I’ve taken my phone in briefly, taken a quick picture of my feet and mat as discreetly as possible, but then I take my phone out of the studio and put it in my mat bag. There have been several classes where someone’s phone has gone off or I’ve even caught someone texting in class. Get it together, that’s just rude. Plus, if you can’t go 60 minutes without being connected to your device, we have a bigger issue.

The owner of the studio I go to was telling a story a few weeks ago about a lady who came to take a class. She had never been there before and truthfully, the lady seemed a bit off her rocker and completely out of her element, but she freaked out when she was asked to take her shoes off before entering the room. There would be nothing comfortable about doing yoga in shoes, but that aside, this is how it goes; take them off.

Along the lines of arriving on time, it’s also important to not leave early. If you can’t stay for the whole class, you probably shouldn’t come. Now, I understand there may be an occasion or two where you have to duck out a minute early or something and I may grumble under my breath a bit because even if you’re being super quiet, I do hear you,  but as long as you’re not making it a habit, I guess it’s fine. One of the classes I try to fit in every week is a very restorative yin class followed by a short guided meditation. I love this class as a way to wind down my weekend but there was a girl who would leave after the yin to avoid the meditation; she did this several weeks in a row and I think it’s so rude. There was even a class when the instructor explained how the class is structured, someone asked if they could skip the meditation and the instructor very nicely basically said “unless you really need to, then no, you should stay” and this girl STILL left. She hasn’t been in the last few classes and truthfully, I’m hoping it’s because someone approached her and basically said it’s ALL OR NOTHING. (<<anyone else want to start singing O-town now?)

It’s one thing if you need a break and take child’s pose or if you need to modify to an easier pose, I totally get that and by all means, listen to your body. Also, if you’re taking a more advanced pose or have the time to transition to a more advanced pose from the one you’re in, I’m also totally cool with that. What I’m really talking about is when someone is off doing their own thing. I think it’s rude to the instructor and totally distracting to the rest of the class. I repeat, I don’t include modifications or advanced poses in this, but a completely different flow. Obviously, it’s different if the instructor has given you time to make up your own thing, but otherwise, follow the flow.

Okay, technically this really sums everything up into one but it’s still deserving of it’s own line. Some of the other things that could fall into this category include laying off the perfume (some of us like to breathe)! Also, if you need a break from the flow, find child’s pose and reconnect; standing at the top of your mat looking mad and frustrated doesn’t help anyone and can be quiet distracting and truthfully creepy when you’re not expecting it.