“We are never as put together as we seem, but we can always try to fake it til we make it” 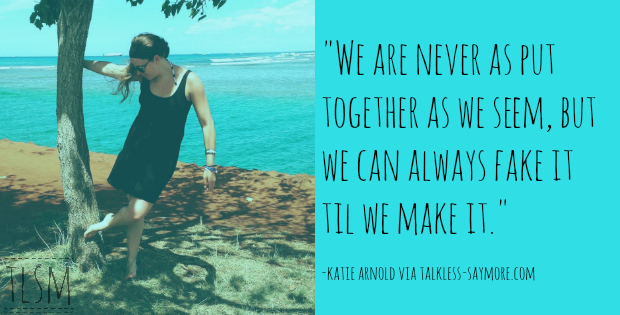 A little shameless self-promotion, but in November of last year my personal mission statement was shared in a Forbes article (originally posted on my blog) alongside Oprah, Richard Branson and other successful CEOs (um…am I a CEO?!)…

Anyway, the point I’m getting at is that every time someone reaches out to me after seeing that article it surprises and humbles me. The other night I got in a conversation on Twitter with a guy who said my statement was his favorite and wanted to email me with some questions about life (REALLY?!). Of course I said yes and then I told him “We are never as put together as we seem, but we can always try to fake it til we make it.”

I thought I was being funny but he quoted me, making me realize the importance of this statement.

In a world of social media, it’s easy to fall into this comparison trap, looking at one person’s successes and totally looking over their failures or the struggles that it took to get there. While social media is an amazing thing, it’s also a hurdle that we have to over come.

While I may seem put together, I don’t have it all figured out. I often feel like I’m walking through mud and waiting for someone to throw me a rope to pull me out. I’ve done a mud race before, I know sometimes those pits can suck you in!

I have trials and tribulations; I have sleepless nights and days when I have to force myself out of bed; I have moments when my boyfriend just puts his arms around me so I can cry; I have moments when he’s not around so I sit in my car parked outside my chiropractor and have a mini meltdown.

“We are never as put together as we seem, but we can always try to fake it til we make it.”

Moral of the story? Sometimes I have to fake it, too.

We all have dreams and goals and a reason to keep our eyes on the prize. Some people may seem like they have it all put together and figured out but I assure you they have their struggles too. I promise you we are only seeing a glimpse of their lives through the bubble that is social media.

Keep in mind this doesn’t mean we fake our way through things without asking for help or doing poor work because we don’t actually know how to do our jobs, it means some days we put a smile on our face even though we aren’t feeling 100% happy; it means some times we plan and plan and plan and when things don’t go as planned, we go with the flow as if that was always the plan; it means we allow ourselves to enjoy the journey and every thing that comes along with it.

Tell me this – what is something you’re working towards and how are you “faking it” to get there?