I’ve had this urge to bake for a few weeks now.  I attempted a bread last week that while good, wasn’t phenomenal so I didn’t share.  I ate it, but I didn’t share.  (Aside from a couple pieces to Amy.)  It clearly wasn’t enough to curb my baking craving as it’s still been hitting strong all week.  Since Saturday didn’t end up the way I originally planned, I decided to break out the baking supplies and use up a few ingredients that were on their last legs in my apartment: bananas and strawberries.

I scoured the internet looking for a recipe to jump out at me and while I definitely found a few front runners, I ultimately decided to take my favorite banana blueberry bread recipe and adapt it to what I had available to me.  I wish I could say it turned out amazing, but while it tasted good, something was off. 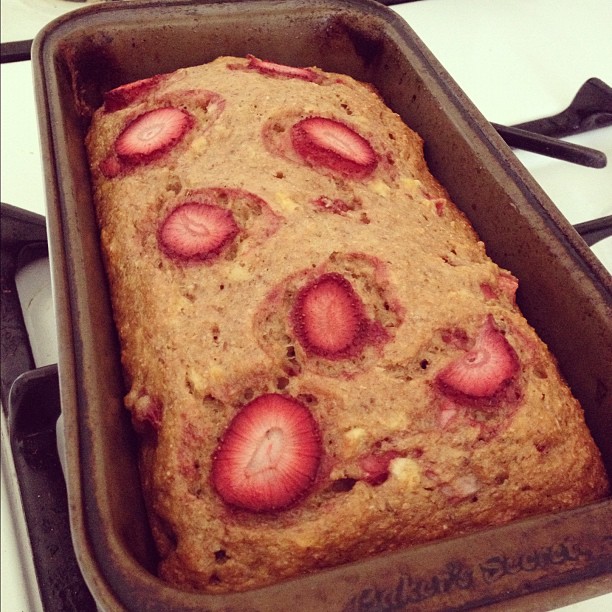 It baked for over an hour at 350*, the outside was done perfectly, the toothpick inserted into the center came out clean but the bread was still gooey inside.  It went back in the oven for a few minutes but I was afraid of burning the outside so it didn’t stay in too long.  It tasted good, but it’s not ready to make it’s debut to the world.  That seems to be the case with my baking lately.  It’s not the end of the world, but it’s a bit disappointing.

Any baking or cooking disasters in your kitchen lately?

Any fool-proof recipes I must get my hands on?

2 thoughts on “Foodie for a Day // Baking Craving”