I’ve had a jar of peanuts waiting to be turned into peanut butter for a couple weeks, maybe even months now.  It wasn’t until last night that I decided to whip out my food processor and quickly got to work!  Just a few minutes later I had a jar and a half of maple cinnamon peanut butter.

Clearly it’s quite easy and all you need are:

I started by blending the peanuts until they formed a ball and then added maple syrup and canola oil to get everything working and moving again.  Cinnamon and salt to taste, and more maple syrup and oil until the desired consistency is reached. 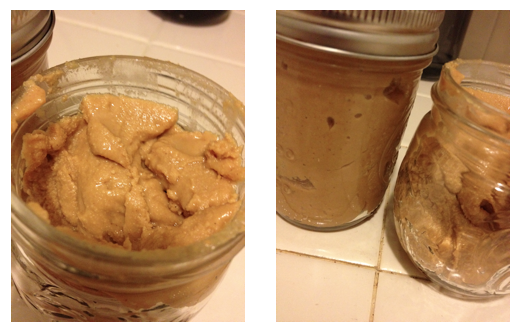 Peanut butter was then jarred and put in the fridge awaiting my breakfast.  …but not until I stole a bit to make a quick after-dinner snack with tea and a bit of my mom’s homemade jam.  YUM!

Don’t forget to text your roommate that you’ll TRY to save her some…make no promises! 😉

2 thoughts on “Foodie for a Day // Maple Cinnamon Peanut Butter”