While I do plan to get to the awesome fun and adventures of my trip to Boston and New York City, I think it’s also super important to talk about the food.  Yes, I said it.  Besides, who isn’t looking for delicious places to eat?

Breakfast of french toast and scrambled eggs at The Pour House. 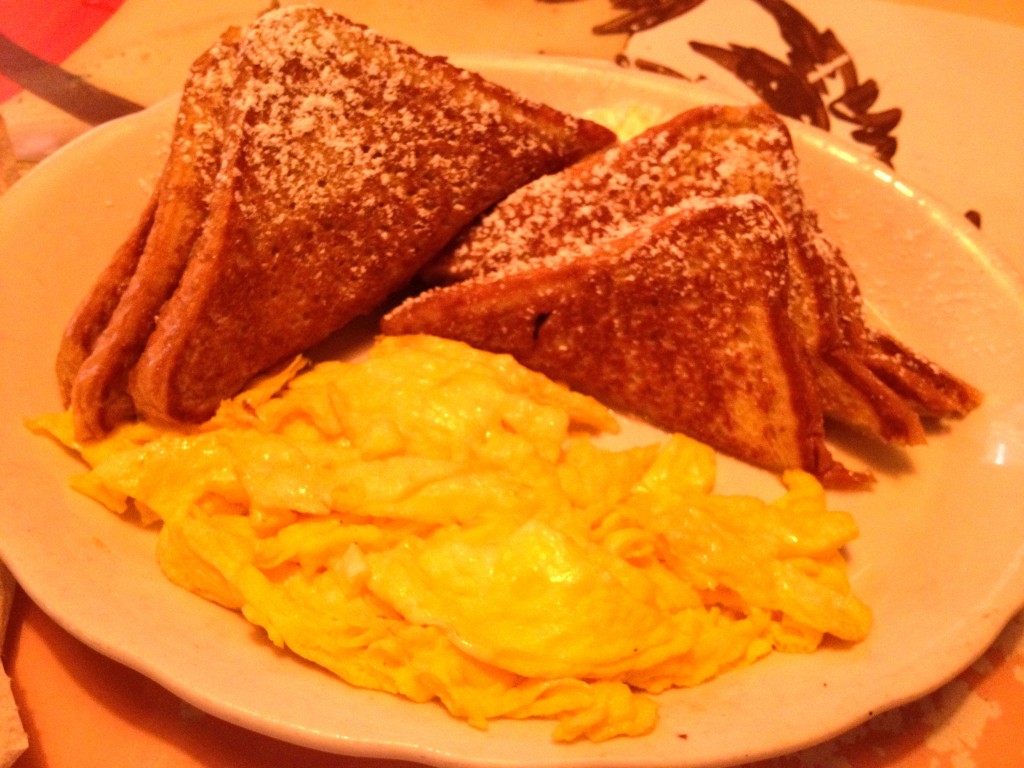 I wasn’t big on the eggs but the french toast was good.  Ultimately, this was meant to be a relatively cheap breakfast but was also tasty.  It was just what we were looking for. 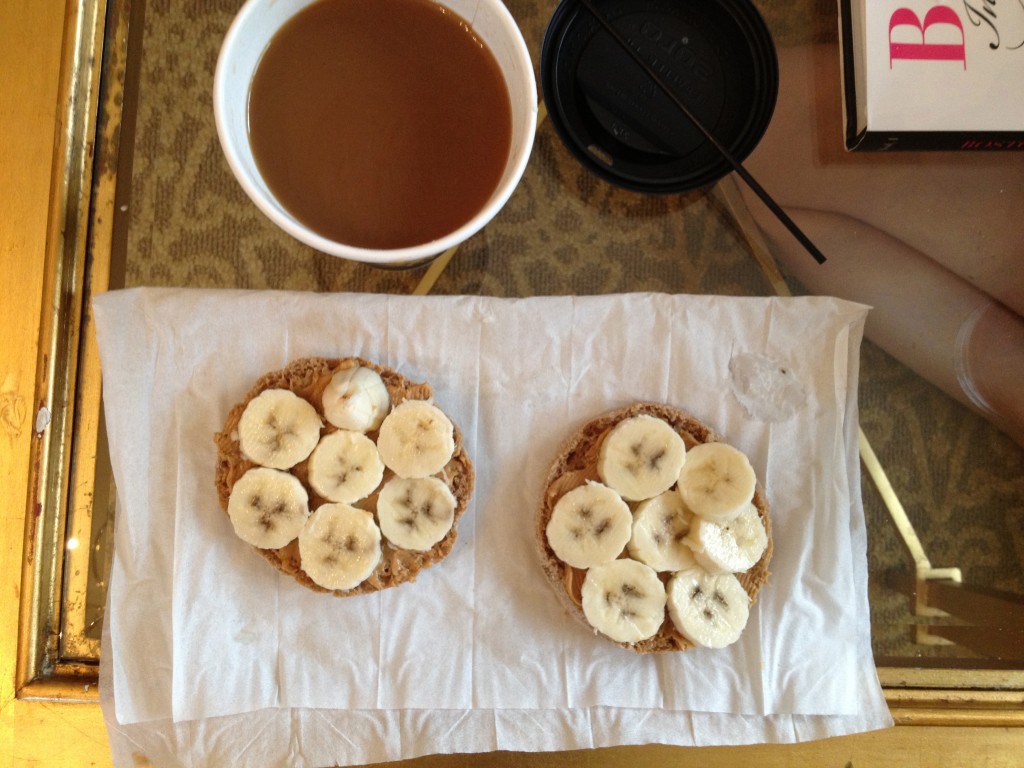 Every other morning in Boston, our breakfast consisted of whole wheat English muffins, peanut butter, banana and coffee (or tea).  Since we had a mini fridge in our room, we were able to pick up a few groceries and save a little money. 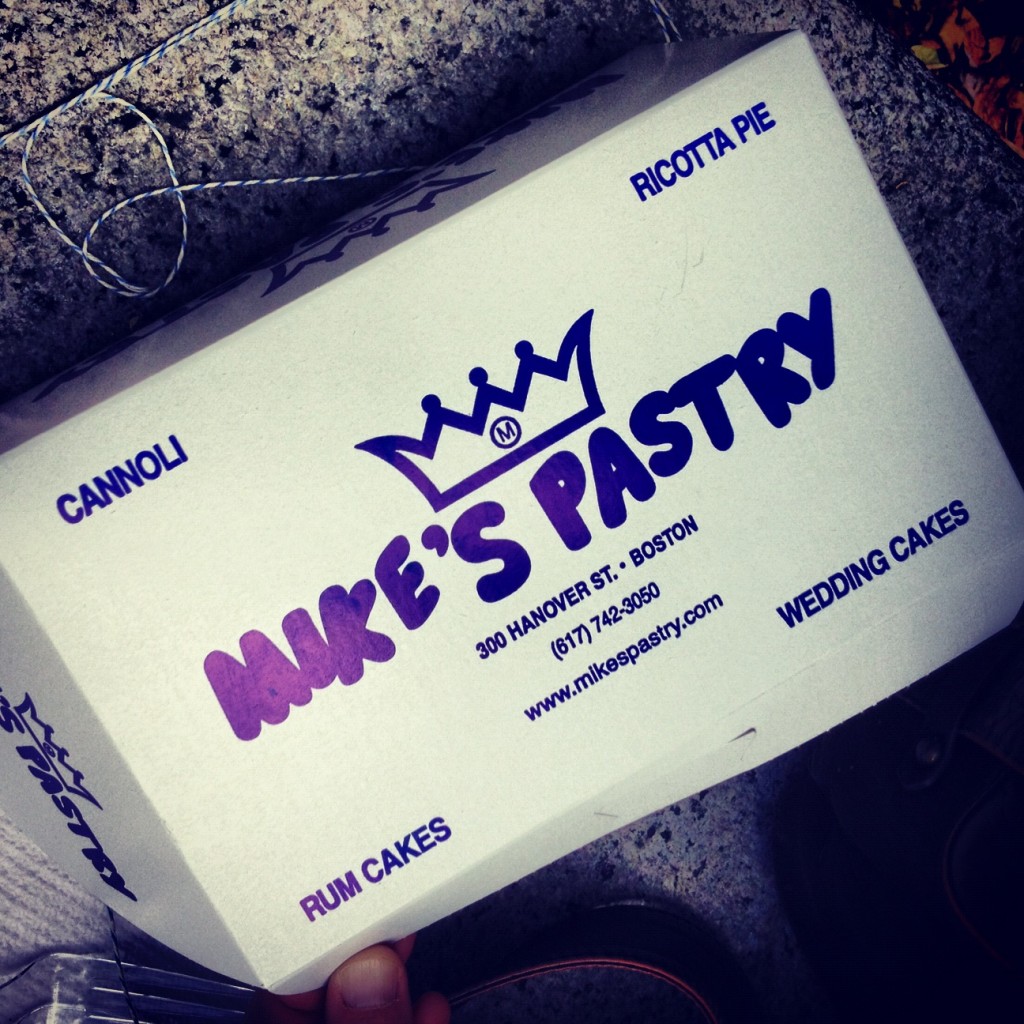 You can’t go to Boston without stopping at Mike’s Pastry.  While I got a little bit of slack over skipping the cannolis, this was my first time ever having Boston Creme Pie and it was amazing! 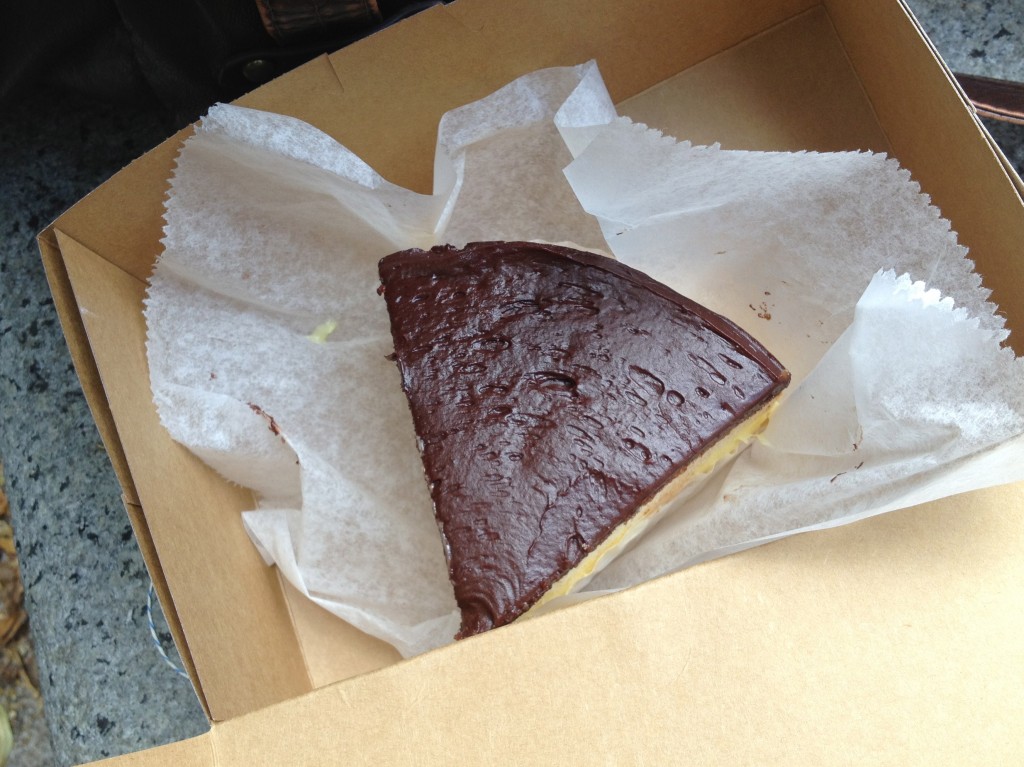 (I’ve also heard that Modern Pastry will give Mike’s a run for their money but aren’t quite as busy.  We walked in and they had a significantly smaller selection and I felt like I needed to show Amy what Mike’s was all about.  So off we went.) 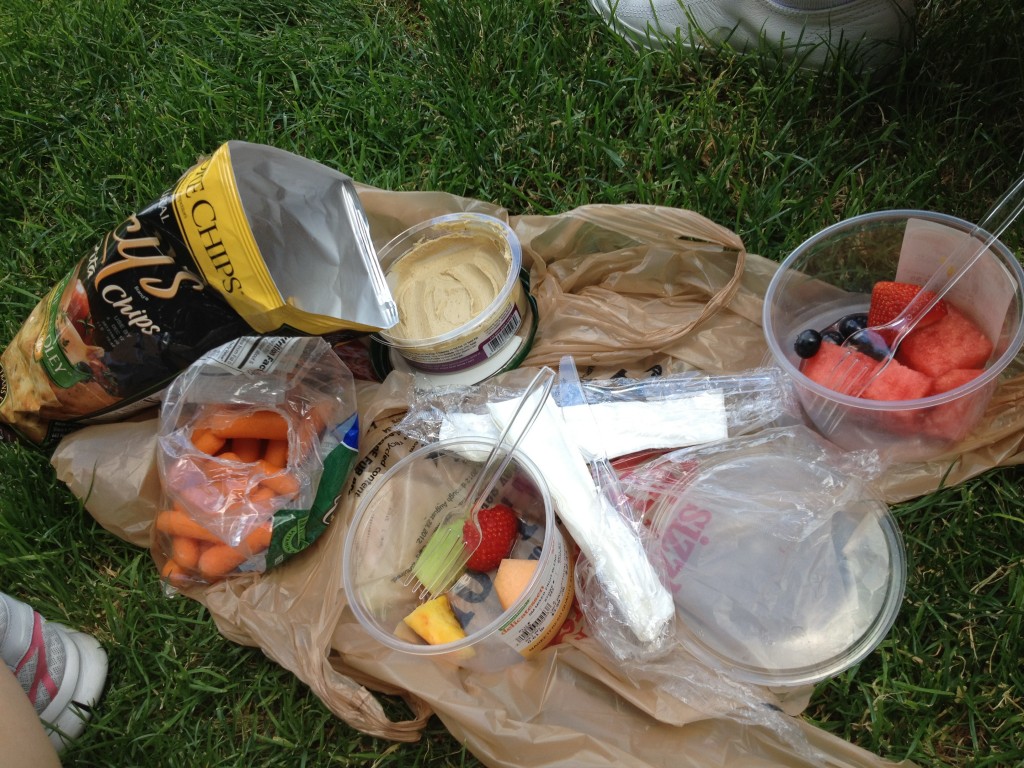 In another attempt to save money and enjoy the weather, we decided to have a picnic in Boston Commons.  Carrots, Pita Chips, Hummus and fresh fruit.  Perfect.

And while we went to an Irish Pub and I ordered fish and chips (which were DELICIOUS), I forgot to take a picture.  Blogger Fail.

Amy didn’t really want to do many touristy things in either city, which having lived in both places I was okay with.  A little touristy and a little enjoying the city was a perfect combination.  But she did have one request for NYC: Serendipity. 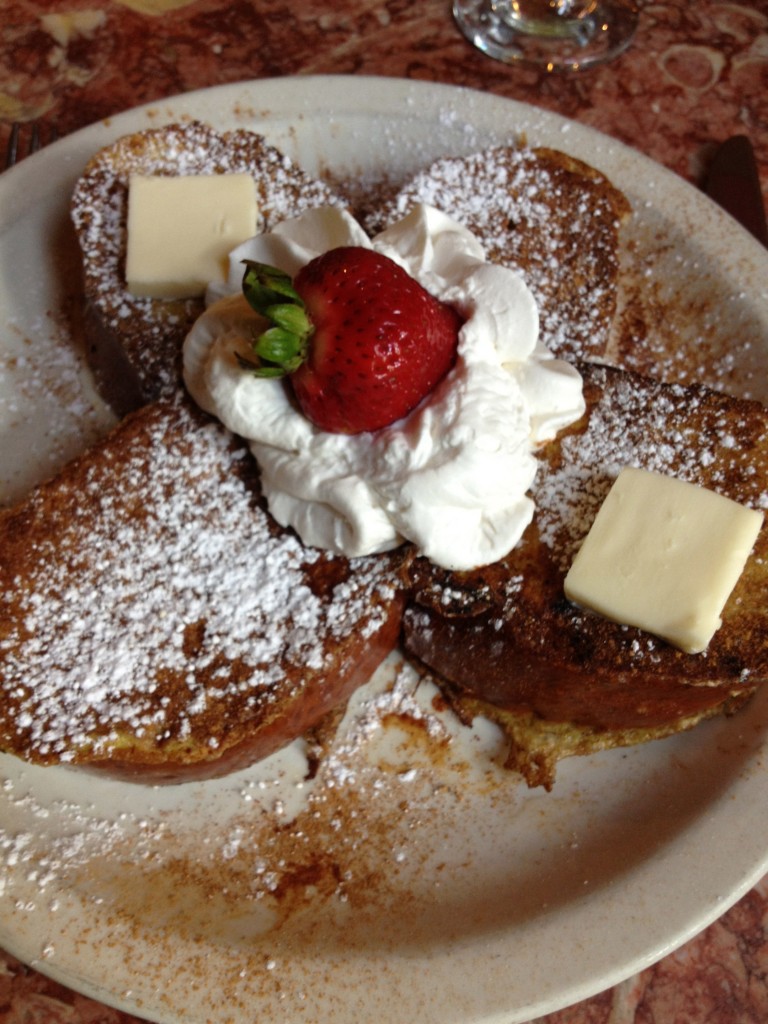 I chose to get the Challah french toast. 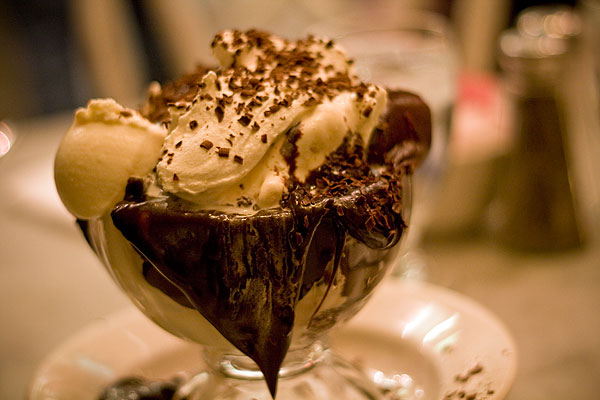 Source – because I failed at taking a picture of ours

And the table shared the Forbidden Broadway Sundae for dessert.  So rich.  So divine. 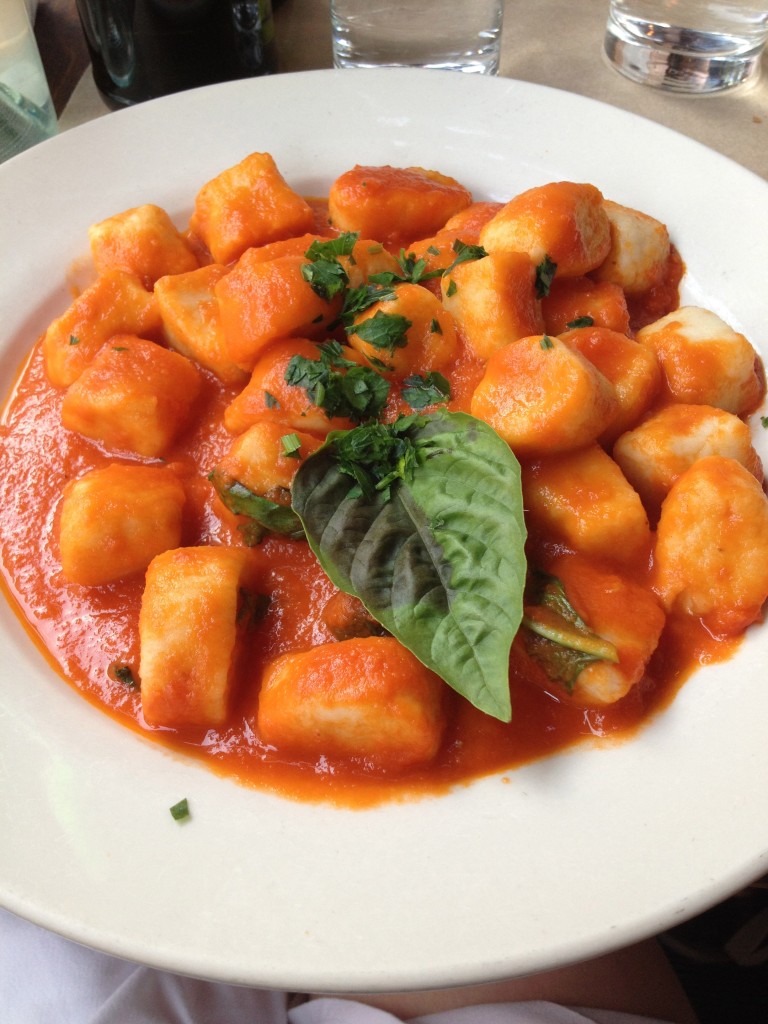 I also tried gnocchi for the first time ever! And I apologize for not remembering the name of the place we went, but I can assure you it was delicious.  I was also super full and need to learn my gnocchi limit for next time!

As I was leaving work right before my trip, before saying goodbye one of my managers looked at me and said “can we talk food?”  I wasn’t sure where he was going with this but was pleased when he listed off a few restaurants in NYC I had never been. 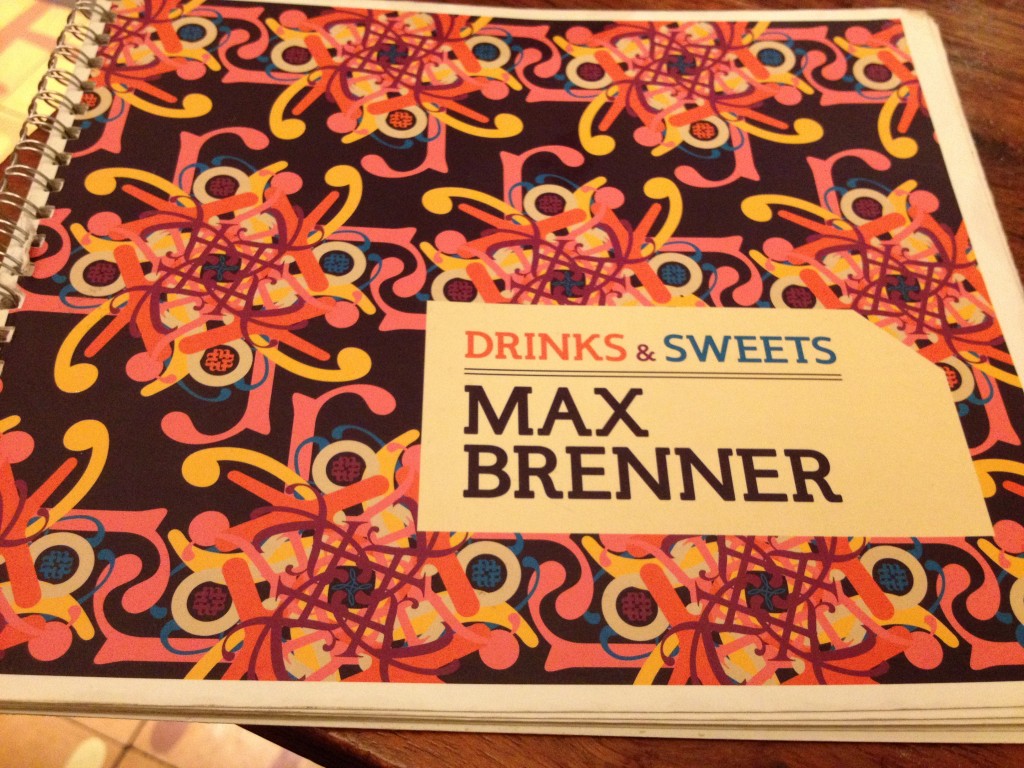 We didn’t make it to both of his recommendations, but we did make it to Max Brenner – known for their chocolate decadents. 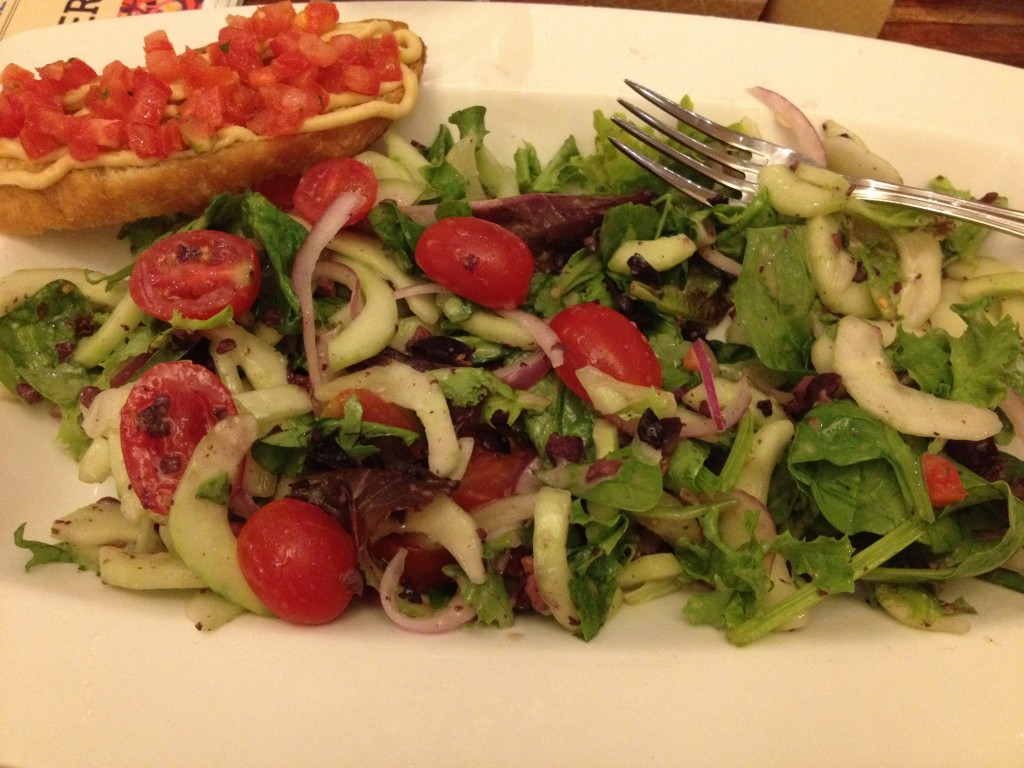 First, we started with some delicious Mediterranean salads. 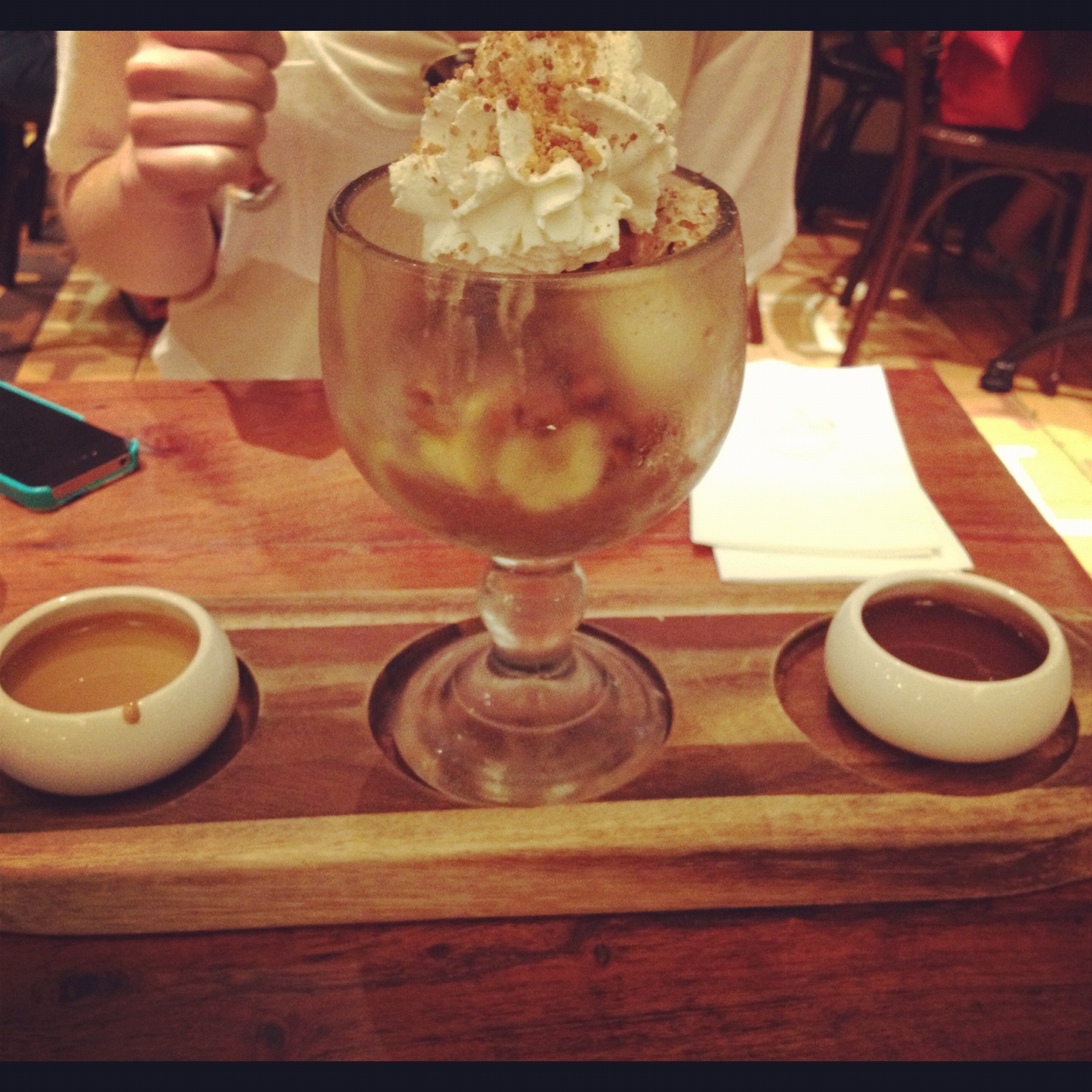 Yes, it was as good and amazing as it sounds (and looks)!

We had some amazing eats on our trip and even more than are even shown.  We allowed ourselves to eat well without completely overdoing it while still enjoying our trip.

Man, all that food makes me hungry. 😉

What good eats have you had recently?