Did you catch The Grammys last night?

I’m not the girl who usually sits her butt down and watches awards shows.  In fact, they usually bore me about 10 minutes in but last night was different.  Last night I had to rush home from a work meeting to catch the show; I wanted to watch.

Re: Ed Sheeran with Elton John!

This video hardly does the performance justice…

Re: Fun wins Song of the Year

Re: Mumford & Sons take the stage – Kait, you’re RIGHT on! 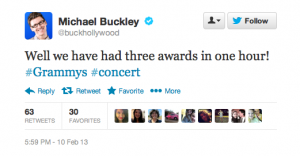 Not a Justin Timberlake fan. #notsorry 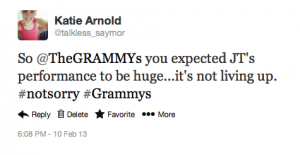 I got the impression I was alone on this one…. 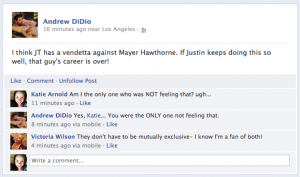 I may not be working with The Lumineers any more, but…

I’ve never been much of a Rhianna fan, but she sounded pretty great last night.

This girl can SING!

My nerves were running high.  I may not work with them anymore, but the 3 years I was with this band, was to put them in a place to get here.

Big stage show? No. Greatest performance of theirs that I’ve ever seen? Not quite.  Best new artist Grammy win? Sadly, no. But… 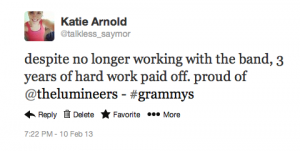 And this sums up the evening pretty well:

Did you watch The Grammys?

What’d you think? Who were you cheering for?