Before I get to my confession, I want to tell you about the DELICIOUS banana bread I made this afternoon.  It’s vegan (aka dairy free for me!) and based off this recipe I found:
http://vegweb.com/index.php?topic=29274.0
I had a few bananas I needed to eat as they were ripening quickly and my frozen banana stash is pretty stocked so I wanted to find something else to do with them.  I debated bread vs. muffins but I hate cleaning muffin tins so bread won this time.
I didn’t have any pecans (or walnuts for that matter) and I had seen another recipe that had a topping and decided that would be fun.  So my toppings consist of almond slices, dried cranberries and shredded coconut – added 15 mins into the cooking time.  I think they could have been added right at the beginning so they would have stuck a bit better, I was afraid of burning but that didn’t happen.
I love how this recipe doesn’t call for any eggs or egg substitutes so you never have an “undercooked” concern.  The bread feels a little heavy and the consistency is a little more cake-like, but that could be because it was right-out-of-the-oven. What?! I couldn’t help myself! Look at this beauty: 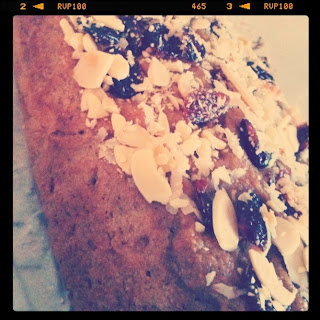 Anyway, I guess I should give you the good stuff – the confession.  I don’t have cable and while there are some shows that I do miss watching, saving money on the cost of cable is nice, as is being less likely to get sucked into a marathon of TV shows and movies, specifically bad ones.  That’s not to say it’s impossible.  With the internet being such a source of information and videos, it’s very easy to get caught up on sites like hulu, netflix, youtube, etc.  And that is exactly what happened.
When I was sick, I took the opportunity to watch (and finish) Veronica Mars.  I never watched this show when it was on but a friend brought it to my attention and since there were only 3 seasons to get through, I knew it couldn’t take up too much of my time even if I did get hooked.  Well, I got hooked and finished the series a lot quicker than I expected and needed something else to consume my time between naps while sick.  I watched a few things on Netflix but wanted to find something more current, so I turned to Hulu.  I looked to their most popular shows and started scanning, when I ran across ‘The Bachelor’ I stopped.  I used to enjoy watching this show sometimes; it was a guilty pleasure.  Part of me found it hilarious, while another part of me felt sad and mildly heartbroken.  I could go into more detail on that but I fear I’d bore you all or maybe you’d instantly become concerned by my heartache.  (I’m a hopeless romantic who has trouble believing in love, so sue me!)
Anyway, I clicked on the link for ‘The Bachelor’ not sure if I’d watch but just to get some information on this season and decide if I wanted to possibly have a good giggle watching an episode or two.  Much to my surprise, I found out this seasons “bachelor” was Brad Womack, the “bachelor” from a few seasons ago who surprisingly turned away both ladies on the final episode…and he’s back?!  I immediately became interested and started watching, only to feel bad for the guy.  Don’t get me wrong, I kind of felt bad for him before.  He got a lot of crap for following his heart.  Leaving at the end of the season with no lady is not how the show is supposed to go, but something didn’t feel right to him and he followed his heart – how can we hate him for that?  Well people…I became interested in watching, which quickly turned into hooked and caught up, just waiting for a new episode to pop up on Hulu.  How could I let myself do this? I’m not sure if I’m ashamed or okay with this.  The hopeless romantic in me wants to see this person finally find something.  The skeptic in me goes over and over how it’s not really possible for someone to “find love” so quickly and when you’re still allowing yourself to date other people that you’re so called “falling for” at the same time as well.  But either way, I need to see how this guilty pleasure show plays out.  That’s my confession.  :sigh: Man it feels good to let that off my chest.

1 thought on “I Have a Confession”