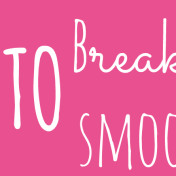 We’ve had a gloomy couple of days in Grand Rapids but I’m not complaining. I love rainy days; they’re just so relaxing. I had a couple cravings this weekend… A photo posted by Katie A (@iamkatiearnold) on Dec 12, 2015 at 1:55pm PST My first was for chocolate. This had actually been going on all last week so I decided… Read more »

Now that we’ve been in the new place for about two weeks, there’s less boxes lying around and it’s starting to actually feel like home. We have internet, cable, a couch and chairs, things on the wall and one of the two cars is able to park in the garage.  It’s the little things, huh?   But what I’m the… Read more »

After weeks upon weeks upon weeks of feeling less than motivated in the kitchen, it’s been nice to start cooking a bit more this past week.  Have I still eaten a lot of my usual eats? Of course, english muffins and garbage bowl salads are some of my favorite things, but it’s important to change things up once and awhile…. Read more »

We’ve all heard breakfast is the most important meal of the day and you know what?  It’s no urban legend – it’s true!  And in all honesty, I’ve never been one to fight breakfast; I love it so much I often eat it for breakfast, lunch, and dinner! 😉 But in all seriousness, it’s true – breakfast is an important… Read more »

I can’t believe it’s Wednesday already.  I swear the weeks are just FLYING by lately which could be seen as a good or bad thing, I’m not sure.  But Christmas is quickly approaching and while all of my shopping is done (sweet!), I’m trying to enjoy the season and wouldn’t mind it slowing down at least a little bit. I’m… Read more »

It’s so close I can taste it. It’s a good things it’s Wednesday and I’m sharing with you my eats or things might get a bit awkward around here. 😉 But in all seriousness – do you know where I am right now?!   Breakfast: Have I mentioned just how much I love season and weather changes? The cold air… Read more »

You may have noticed over the last few months, I’ve been sharing recipes with you that I’ve written for the amazing people over at FitKit. I’ve really enjoyed being able to write a recipe for them every month as it forces me into the kitchen and outside my comfort zone.  And as far as I’m concerned, that’s almost always a… Read more »