To my fellow Apple co-workers who may read this, I’m sorry but I needed to use “dealing with ambiguity” for this…next time you hear me say it, I’ll be at work using more of our ‘Apple’ talk….
I’m so excited because my purchases from TOMS came in yesterday!  It was such a fun surprise that they came so quickly and that little boost was needed last night.  One extra fun thing about purchasing from TOMS is how they always come with a fun little “surprise.”  I guess since I bought a tshirt AND a pair of shoes, I got lots of little extras!  To start with, two pairs of shoes were donated from my purchase!  Additionally, I got two bumper stickers and a TOMS flag/tote thing.  I’m not really sure what the bag is for, but I have an idea to take all of the bags, flags, etc they send and someday use them to create a fun reusable grocery bag or purse.  Anyway, I think the most exciting and heart warming surprise they sent was a string bracelet and letter.  While I know these are sent to many people, it’s such a heart warming letter.  I included the picture below, but the letter basically tells the story of when Blake (the founder of TOMS), delivered a pair of shoes to a child, they put a bracelet (just like this one) on his arm which now serves as a daily reminder of the joy brought to this child for the work he does.  It’s truly touching. 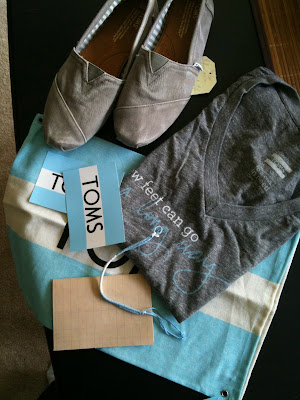 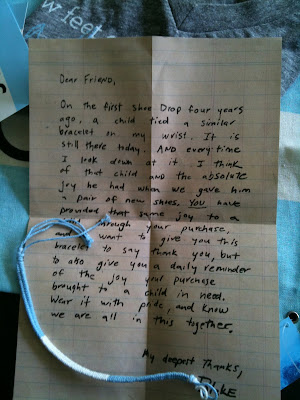 I want to tell you all about something really disturbing I saw last week.  While I was on the Irish Soda Bread hunt, I ran into an Albertson’s and was immediately set off.  I don’t usually shop there unless there’s something I need to pick up on my way home from the gym and I’m short on time to drive to Ralph’s or Trader Joes.  I always find that Albertson’s in more expensive, but I’ve also gone into one location and the guy at the checkout was really annoying (I believe I wrote about him and his questioning for a discount at Apple in a past entry).  But when you walk in and there’s usually a table or display of a current promotion (like hot dog accessories in the summer, etc) there was a table set up with “Earthquake Kits.”  Now, I know that I live in Southern California and we do get earthquakes (I believe we may have had a small one a couple nights ago when I woke up and felt like I was swaying, as if I were on a boat) and I guess it’s considered “earthquake season” BUT this didn’t feel like a reminder to be prepared with canned food and water should a devastation hit, this felt like a decision to maximize profit through the public’s fear.  Maybe I’m reading into it too much, but I was outraged.  And as much as I wanted to find Irish Soda Bread sooner rather than later, I was more than okay having not found it there and therefore not giving the company any additional profit.  Not cool Albertson’s, not cool.
I’m working on changing my mindset about my current situation.  There have been (and will continue to be) lots of long trips to the gym, yoga sessions (there need to be more of these all the time), and hugs and talks with friends.  My gym sessions are usually accompanied by a magazine, a health one if I have one, and as I was working my way through the April 2011 issue of Fitness Magazine, there’s an article titled “This Way Up” about how we will all fail eventually but need to pick ourselves up and keep charging forward to truly reach success.  One line that really stood out stated “everybody fails, but the difference is that people who are successful know how to respond.  The know how to get back up.”  There were also reminders of stories of “famous” people who failed before they reached success and the power to push forward and get where you’re trying to go.  It was mildly inspiring (it’s going to take a lot right now, ok?) but allowed me to reassure myself that I’ll get where I’m trying to go, wherever that is.  As I’ve mentioned several times over the last couple of days, I refuse to make any decisions right now as I know that I’m not in a state to do so.  I’ll brainstorm my options and think through things, but I’m also just trying to take this opportunity for self discovery, to relax and enjoy only working one job (I suddenly have NO idea what to do with my time, I’m not used to this concept of “free” time), getting in plenty of exercise, and surrounding myself with the amazing people I’ve met in LA and reigniting friendships where our time together may have been pushed aside so I could handle the work load I put in front of myself.  Those people are still standing by me, they deserve my time and attention.  I’ll weigh my options for my future and eventually make some decisions.  I’ll watch a few movies (I love that my mom and sister both wished they were around for ‘Little Women’).  I’ll listen to lots of music, both new and old.  I’ll maybe even read a few books.  I’ll organize and re-organize and then organize again.  I’ll do whatever I have to do to distract myself from the overwhelming thoughts that so easily take over.  I’ll allow myself the time that I need to deal with the decision they decided to make and the hurt and frustration that it causes me.  But then I’ll move on.  And I’ll be okay.
P.S.  Thanks to my friend Tina for helping me brainstorm today’s entry name, including the idea of calling it ‘Tina’… 😉