While I told no one my goal finish or planned pace (really I just wanted to finish), I finished a good 8 minutes faster than I was planning to pace myself.

So…how did it go?

It started bright and early with my go-to breakfast of whole english muffin, peanut butter, banana and coffee with almond milk.  It was an early morning but I woke up not feeling over nervous.  I turned VH1 on the hotel TV and it was basically good song after good song playing and getting me pumped up. 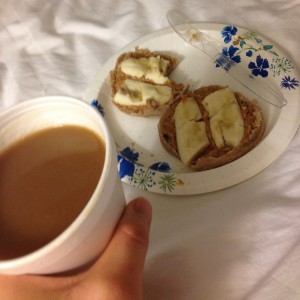 We left the hotel, easily found parking and just waited.  When it was time, I found my place in line and joined the 2:20 pace group.  When the guns went off to start the race, I found myself immediately emotional.  I was feeling great and excited and blessed to be able to run.

I quickly realized I needed to pull away from the pace group.  I was careful not to go too fast but was feeling like I could, needed and wanted to go a bit quicker so I allowed myself to push a little harder to a pace that felt right.  I quickly got in my groove and just kept going.

The first few miles flew by really quickly.  In fact, the first 1/2 went by pretty quickly and I was feeling strong.  I didn’t start hurting until about mile 9 or so when we had another hill (I thought this was a fast and flat course?!) but was still going strong.  It wasn’t until mile 10 when I couldn’t get a water cup from the stand because there were too many people and they only had volunteers on one side (the left). I didn’t think it was going to be that big of a deal (I was carrying a small bottle) but as we hit mile 11 and were running AGAINST the wind, I was wishing for water.  I slowed down, big time.  This was really when I started hurting.  My hips (especially my left) were hurting and the wind just took so much effort.  But I was so close I could take it.  I kept telling myself only 2 miles, you can totally run 2 miles.  So I didn’t stop.

I passed the final water station and made sure to grab a cup.  And then I kept going.  I knew I was close.  I knew I only had a mile or so left.  I knew I could finish.  I turned the corner and you could just hear the screams.  We were in the home stretch. I got so emotional in this moment and chocked up I could hardly breathe. You couldn’t see the finish line but it was near.  I kept pushing.  I saw my mom quickly and knew I was almost there.  I kicked it into high gear and heard someone say “that’s an A!” (I have no idea what that meant, if it was towards me but I used it as fuel – A for effort to finish strong!” I sprinted as fast my little legs could go around the corner and to the finish.  I saw no one, I heard nothing, I just had one thing in mind – cross.that.finish.line.

Despite a 2 hour 20 minute goal, here’s how I finished:

I was ecstatic.  Goal achieved. 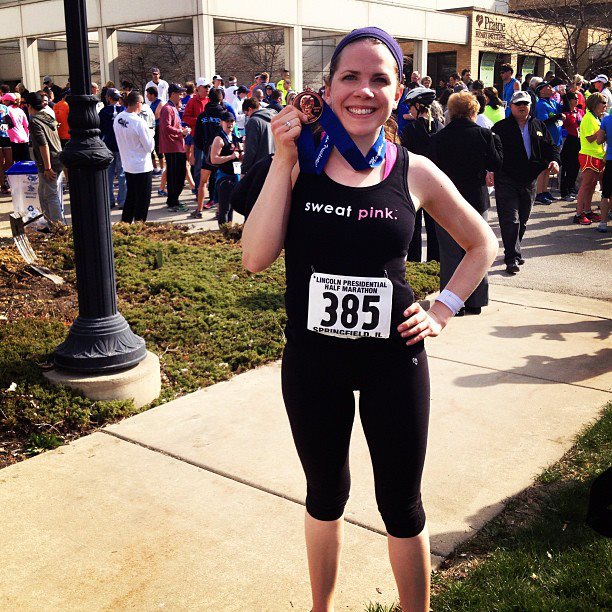 I’ll share any official race photos as they become available.  All of today’s photos were taken by my cheerleaders parents. 🙂

40 thoughts on “The Outcome”