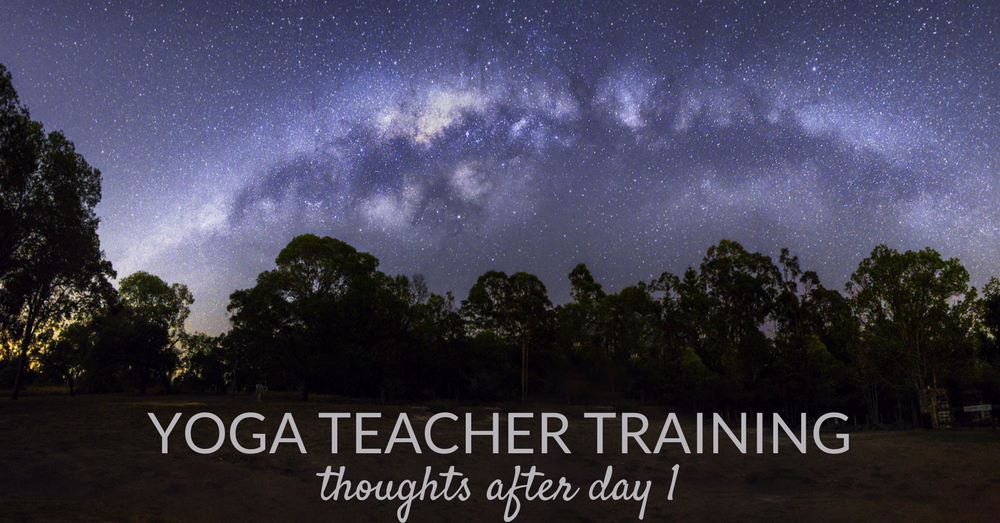 The excitement was present all day. Today was finally the day that I would get to start yoga teacher training. Today I would finally get to start this journey. I have no idea where it will lead but today it finally starts.

I got out of work early to go to a doctor’s appointment, I stopped at Target, and then I made my way to the studio. I had never been to this (new) location so I was fine to arrive early, knowing I could either go inside or just sit in my car and scroll through Instagram for awhile, which is exactly what I did.

Shortly before I felt it was an appropriate time to go inside, I felt the anxiety start to build. I noticed my mind wandering to unhealthy thoughts and places and I knew I needed to get it in check. I turned the radio off and meditated for a few minutes, focusing on my breath. My anxiety simmered, though it was still present and with it came the nerves.

What in the world did I sign up for? Am I crazy for not asking more questions but rather just diving in to this experience? And there’s 13 people doing this! Last I knew there were 8 of us. I like the idea of a small group better, maybe this was a bad idea!

I messaged a friend and asked for a pep talk. He lives in Australia and I knew it was likely a weird time for him, so I gave myself a little push and I made my way inside. I saw a friendly face of a girl who I regularly see in some of my classes, she waved and I waved back. I put my stuff in a cubby, used the restroom, grabbed my mat, and sat down next to her on the bench. I was so relieved when she said she was nervous. Me too.

Day 1 started with a 75 minute class. THAT was what I needed. Focusing on the flow, my breath, and just moving my body took my mind away from the fear. We took a short break, then all gathered back in the room and were handed our manuals. I assumed today would just be “here’s what to expect” and while we did go over that, it was made very clear “when you teach tonight…”

Immediately I felt the anxiety begin to simmer back to the surface. I tried to remind myself that it WILL be okay, I will NOT die, and THIS is what I signed up for. We broke into small groups or partners and each took a turn running through “the first 5 minutes” and then providing feedback.

“You could speak louder,” my partner told me.

When we both took our turns, we were called to join a couple other groups that were also done. “Who wants to volunteer to lead this group?” one of the instructors asked. I heard the girl whose mat was right in front of mine say “not me, whoa anxiety!” or something along those lines. I found myself nodding in agreement so I took a deep breath, raised my hand, and said “I will.”

WHAT?! What are you doing?! You’re not ready for this! There are 8 people right here! They’re JUDGING you!

I took a deep breath and I began. And guess what? I didn’t die. I didn’t faint. I didn’t even forget my name. I had my notebook in front of me but I tried to only glance at it when I found the nerves making me wonder what on earth comes after twisting to the right (um…how about twisting to the left?). I tried to watch the faces and movements of the other students and of the two instructors who were also following my queues. It was 4 minutes of my life and I didn’t die. In fact, the feedback was rather positive.

Were there things I could work on? Of course. Hello, this was only my second time. But did people have a lot of good things to say? Yes. I felt nervous, but I was told I didn’t sound it (by one of the instructors). I was told my voice was soothing and calm. And when our “official” feedback session was through, I was told I was brave.

Wow. I wasn’t expecting that. “You were so brave. I couldn’t do that.” Those words carried me the whole hour long drive home. I didn’t feel like I was being brave; I saw my anxiety staring me right in the face and I knew I had two options: let it win this battle, or make sure I did.

We all know who won that match. Me.