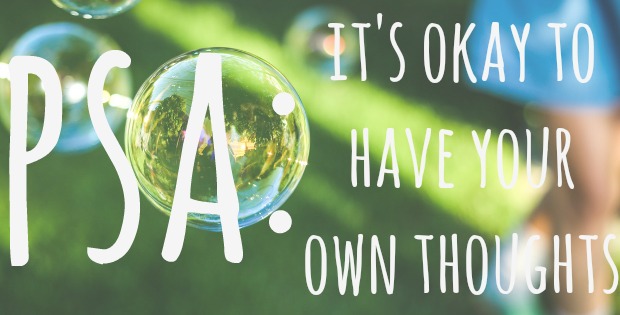 Can we get a bit serious today, please?

Don’t worry, not like a ‘down in the dumps’ serious, just a bit of a heart-to-heart meets vent session?

You see, I have this coworker (at my second job, let’s call him Jake) who has a very clear vision of how he thinks things are “supposed” to be in life. He was obviously raised in a very specifically thought out family and he holds those beliefs very close to his heart which in many ways I understand. But what I don’t understand, is how limiting his views are outside of that or more so, his reactions to finding out mine.

I am not shy to say that I don’t want my own children.

I’ve said it countless times and I will continue to, but that doesn’t mean I hate kids or if someday it just happened, that I wouldn’t love that child with all of me. What it means though is that I make decisions (and will continue to do so) that fit with my desires for my life.

Side note: I know it raises confusion for people when they know I dated someone with a child and no, that didn’t change what I wanted. There were private conversations that happened behind the scenes and so I’ll just leave that at that.

I’ve also said that if I changed my mind down the road, I would adopt but that “innate” desire or “motherly instinct” or whatever else you want to call it, that women get about the idea of having kids just doesn’t live in me. And you know what?

I bring this up because of his reaction to my statement. I always planned to avoid this conversation with Jake but it was brought up after he saw my reaction to a video of my friend’s baby taking some of his first steps. That little boy may as well be my blood nephew, I love him to pieces, so needless to say, there were many “awwwww”s in response. Jake said “someday you’ll have your own” to which I responded “no, that’s not in my plan.”

He looked like I just killed a puppy and proceeded to tell me about someone he knows who used to say the same thing and now has 2 children and REGRETS ever saying otherwise. I knew he was biting his tongue from saying more and I knew I lost some respect in his book, but can I just say… 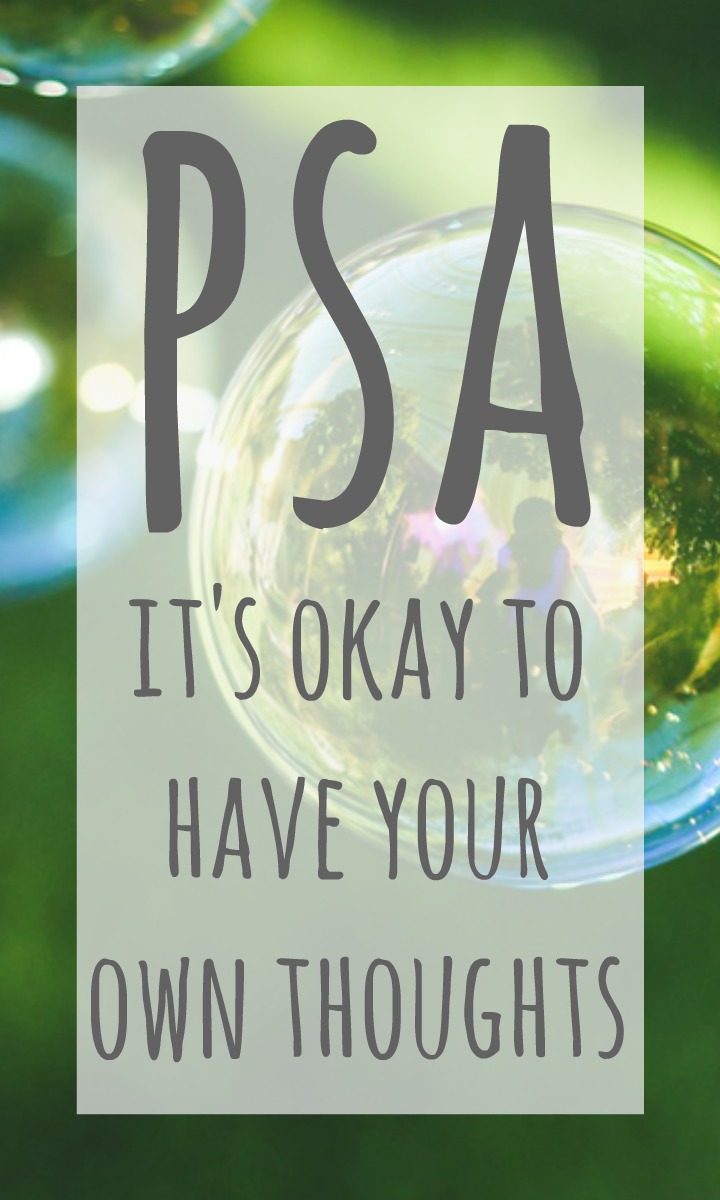 IT’S OKAY TO HAVE YOUR OWN THOUGHTS AND IT’S OKAY THAT MINE MAY NOT ALWAYS MATCH UP WITH YOURS, OR YOURS WITH MINE!

But…while I have my thoughts and you have yours, it’s NOT okay to make anyone feel bad or shameful or like their beliefs, desires or dreams are any less because they aren’t the same as yours.

And now that it’s out there, I’ll step off my soapbox and let you carry on with your day. 😉

13 thoughts on “PSA: It’s Okay To Have Your Own Thoughts”